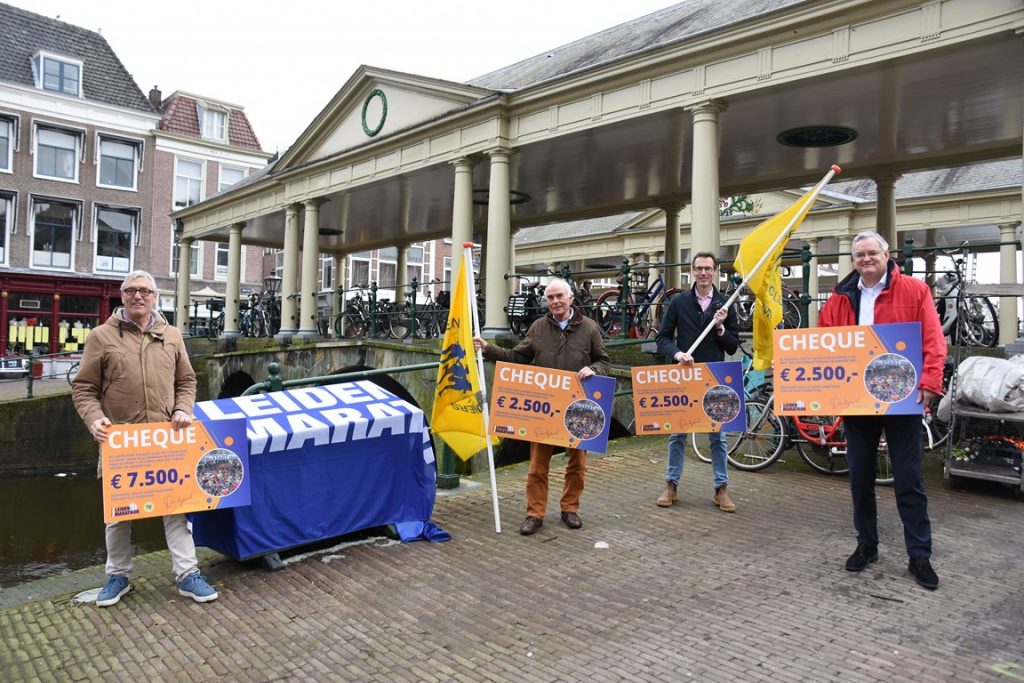 The Leiden Road Runners Club has transferred an amount of 7,500 euros to the Leiden Marathon. The money is intended to maintain the Leiden marathon at a time when the event has not been allowed to organize anything for more than a year and has therefore fallen into financial difficulties. The checks were handed over by three chairmen at the Vismarkt, the place where the finish line of the Leiden Marathon is usually located.

The money was raised by the club itself, the Friends of the LRRC and the Leiden Road Runners Fund, who each donated two and a half thousand euros. Marathon chairman Tjeerd Scheffer was very happy with the contribution and reported that the goal of the crowdfunding campaign was achieved precisely through this donation. The chairman noted that in addition to the money, the gesture also says something about the warm relationship with the running club. The Leiden Marathon was born out of the Leiden Road Runners Club, which was founded after a trip to the New York Marathon, the great example of the Leiden race.

For Niek Hoogwout, chairman of the Leiden Road Runners, the gift was logical: ”A few hundred of our members participate in the marathon every year. Many run or walk and others volunteer again. In addition, we always hold our club championships during the Leiden Marathon. So we feel it as our marathon. So it makes sense that we help if necessary.”

To which the chairman of the Friends of the LRRC, Guy Seelen, added: “There is always such a great event, pure promotion for the city of Leiden. It is our home game that we should cherish and that we always look forward to.” Jan Karstens is one of the founders of the club and the marathon. As chairman of the Leiden Road Runners Fund, he made a donation and says: “The Leiden Marathon is in its thirtieth edition. It cannot be that this beautiful match is lost. So I’m glad the three of us are here to support our marathon.”

The Leiden Marathon is having a hard time now that no competitions are possible in 2020 and the spring of 2021 due to the pandemic. In order to be able to pay the fixed costs, the organization has held a crowdfunding campaign. The goal that has since been achieved was to raise 25,000 euros. In addition, many runners donated their registration fees and an extra subsidy has been requested from the municipality of Leiden.

The 30th Leiden Marathon will not be held in May this year, but on October 10 if the corona measures allow it. The organization and the thousands of runners and walkers are eagerly looking forward to it.